Now that we’re back to introducing writing systems of Africa, this one takes us to the southern region of the African continent, intended to represent kiSwahili, Kikongo, Tshiluba, and to a limited extent, Lingala. Invented in 1978, this script appears to be a robotic mess of lines, an alphabet which is organised into syllabic blocks. This, my readers, is the Mandombe script.

Mandombe finds its roots in the Bas-Congo province of the Democratic Republic of the Congo (DRC), in the city of Mbanza-Ngungu. In the late 1970s, a man named Wabeladio Payi, had this dream where the prophet of the Kimbanguist Church, Simon Kimbangu, revealed this writing system to him, based on the sacred shapes 5 and 2 (when you see them on those LCD screens on digital watches like the one below).

Intended to represent the four national languages of the DRC, kiSwahili, Kikongo, Lingala and Tshiluba, the Mandombe script made its way into the Kimbanguist church schools of Angola, the Republic of the Congo, and the DRC.  It is also promoted by the Kimbanguist Centre de l’Écriture Négro-Africaine (CENA). The Mandombe Academy at CENA is currently working on transcribing other African languages in the script. Today, it is classified as the third most viable indigenous script of recent indigenous African scripts, behind only the Vai syllabary and the N’Ko alphabet (I mentioned these scripts in previous posts, do check them out).

So much like Hangeul, or the Korean alphabet, Mandombe organises consonants and vowels into syllable blocks. All letters are based on the square 5 shape, and the six vowels are distinguished by numbers added to the right of this shape. So vowel 1 is i, 2 is u, 3 is e, 4 is o and 5 is a. The sixth vowel ü is a slight modification of u. 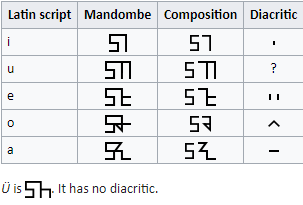 The diacritics are used to represent diphthongs, or more rather the second vowel in diphthongs. Diacritics come at the end of the last stroke of the vowel. While there is a diacritic for u, sequences ending in u are instead generally written as two full syllables, the second being wu.

Vowel diacritics are reflected along with the main vowel.

And of course, Mandombe has extra diacritics to represent more complex syllables like prenasalisation and nasalisation and consonant clusters. Tones are also part of this package here. From what I understand, the high tone is formed by adding a line to the vowel base shape and pushing the vowel number down by one unit (I think, don’t worry there’s a table below). So undoubtedly to me, the additional diacritics to represent more complex syllables perplexed me when I tried learning this alphabet.

Numbers here are quite interesting and creatively formed, I’d say. Numbers representing 1 to 5 have been covered in the vowels portion so I’ll jump straight to 0 and 6 to 9. 0 is essentially represented by a triangle, 6 and 9 in Mandombe are square versions of what we write, 7 is a mirror image of 6, and 8 is a mirror image of 9. All in all, the numerals turned out to be the simplest ones to comprehend.

So earlier, I mentioned that Mandombe is among the most viable writing systems in Africa, behind Vai and N’ko. In my opinion, Mandombe would be the most difficult out of the three writing systems in discussion, even though Vai has some 200+ characters to learn. This is because of the good spatial skills one might need to have when writing in this script, as Mandombe features heavy use of reflecting on one or two axes. Thus, before writing a character, one must know the base character, the vowel character, and how the entire block would flip depending on the consonant they want. The places at which diacritics occur have to be noted well too. In terms of practicality, Mandombe is used to represent four languages, but it is limited in the representation of Lingala vowels. Despite this limitation, developers still try to make progress in this alphabet, expanding its representation onto more languages.

Overall, the Mandombe script is one which looks like it is ahead of its time, with characters appearing to be digital-style inscriptions on Etch-a-Sketch board, or some would relate it to stereotypical science fiction. It tries its best to represent the national languages of the DRC, even though Lingala might be slightly underrepresented. Nevertheless, it has gained popularity among the people, especially those under the Kimbanguist Church, and continues to make its way into the digital world.

Next time, we explore one writing system which surprisingly, looks a lot like Hangeul!

One thought on “Writing in Africa – Mandombe”