So it’s been about a couple weeks since I started learning Tamil, and I thought that it would be nice to share my first steps in language learning. My focus here would thus be the sounds and script used in Tamil. Tamil is among the longest-surviving classical languages in the world, with literature dating back to over 2000 years. Now spoken by at least 70 million people globally, Tamil has achieved official language status in India, Sri Lanka and Singapore, with minority language recognition in Malaysia, Mauritius and South Africa.

Tamil belongs to the Dravidian group of languages, which is vastly different from Hindi, which is an Indo-European one. Thus many words, grammatical structures and expressions in Tamil differ from Hindi. For example, in Hindi we say नमस्ते (namaste) for ‘Hi’, but in Tamil we say வணக்கம் (vanakkam). A couple of similarities between Hindi and Tamil would be their verbs being in the last place in the sentence or clause, and that their script is an abugida/ alphasyllabary.

As in Hindi, Tamil has retroflex consonants. But more. In addition to the retroflex ‘t’ and ‘d’ we find in Hindi, Tamil has a retroflex ‘l’ ள, ‘n’ ண, ‘s’ ஷ , ‘r’-tap ர, and the most difficult of all, the ‘r’-approximant ழ. Tamil also has 10 vowels, including five short and five long ones (the a e i o u) and two diphthongs (ai and au). And it also has nasal vowels but it is not readily represented in the writing system. Fortunately, living in Singapore has given me the chance to meet and chat with Indian friends (most of whom speak Tamil) to learn more about pronunciation and fine tuning it.

The Tamil script is probably one of the easier alphasyllabaries to understand, that is, until we get to writing the i, ii, u and uu parts. It essentially has 30 letters, excluding the six it borrowed from the Grantha script for use in loan words. Among these 30 letters, 12 of which are vowels, readily representing the two diphthongs, five long and five short vowels. The other 18 are consonants, which undergo modifications to change the vowel. One thing interesting to note, and that is each letter may represent at least one sound. For example, க may represent ‘k’, ‘g’, ‘x’, ‘h’ or ‘ɣ’, ச may represent ‘s’, ‘t͡ɕ’, etc. Tamil also packs in this special marker called the aaytam ஃ, which modifies the consonant to represent foreign sounds, like ‘f’ and ‘z’. 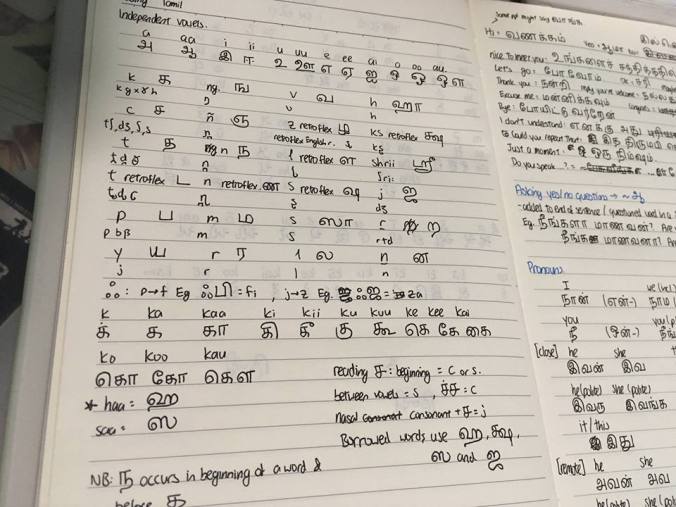 One difficulty in the Tamil script would be writing the Ci, Cii, Cu and Cuu forms of the consonant C, as the Grantha letters are among the irregularities in writing such forms. Thus, what I did was to practice writing such syllables.

Spelling also presented a challenge for me, as there are two couples of letters which are pronounced almost the same, but are written differently, namely ‘na’ ந, ன and ‘ra’ ற, ர. I was told that ‘na’ usage differed on where in the word it is used, and for ‘ra’, it is less obvious, but ர is used more often so I should use that if I was unsure. That piece of advice alleviated much of my confusion, but nevertheless, I sought help from my friends to correct my spelling, especially when it comes to these letter mix-ups.

Living in Singapore has taken eased looking for resources to some extent — some second-hand bookshops have Tamil resources, Tamil mother tongue books are sold in bookstores, and various ebooks could be found online. Also, 7% of Singapore’s population speaks Tamil, meaning that there are potentially thousands with whom I could practice Tamil, but I preferred to consult a few of my friends before seeking help from people outside my social circle. To practice spelling, I tried making transcriptions in the Tamil script when using Routledge’s Colloquial Tamil coursebook. As it only provided dialogues in the Latin transcription and a few sections on the Tamil script, I felt the urge to write the dialogues in the Tamil script. I have also obtained an ebook about an Intensive Course in Tamil, with Tamil script and transcriptions in Hindi. While exploring more about this Dravidian language, I’m sure that I would encounter more unique resources to make this learning experience a more fruitful one.