Africa, a continent of thousands of ethnic groups, the most among all continents. Alongside these ethnic groups lie the linguistic diversity, rivaled only by the language diversity of Papua New Guinea. Many of these languages are still vulnerable to endangerment and extinction, and many of these also lack a written form to document their language. The next few posts are going to cover the various wonders of writing systems in Africa, most of these were invented in the past 50 years.

Let’s go to Ethiopia, where we find one of our answers. Ethiopia is home to Amharic, Tigrinya and other various languages. Most of these speakers use a writing system native to the Horn of Africa, the Ge’ez script, in which the letters are referred to as fidäl (ፊደል). Invented in the 6-5th century BCE, this script is still used today to write Amharic and Tigrinya. Thus it is not uncommon to come across shop signs written in Ge’ez. Ok now on to some technical things. 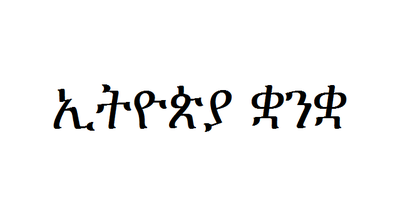 These are the two most commonly used indigenous writing systems in African still used today, and there’re still many more writing systems we have not talked about yet, including intriguing ones like the Mandombe script and the Nsibidi ideograms. All these will be shared in the next few posts. Stay tuned!

2 thoughts on “Writing in Africa”